Madrid, November 3 – The global insurance industry is undermining the achievement of climate goals by continuing to support new oil and gas production projects. This is the main conclusion highlighted by the Insure Our Future campaign – a global coalition of organizations aiming to pressure insurers to stop insuring fossil fuel projects – in its fifth annual report launched today at COP26.

Pressure is building for insurers to act. As UN Secretary General Antonio Guterres said at the Insurance Development Forum in September, “Carbon neutrality commitments are needed to cover underwriting portfolios, which should include underwriting coal and all fossil fuels.”

The insurance sector has a key role to play in driving the transition to a low-carbon economy, aligning its business to the goal of limiting the rising global temperate to 1.5ºC. 26 organizations from 14 countries, with the International Institute for Law and the Environment (IIDMA) among them, today during the COP26 held in Glasgow made public the 2021 Scorecard on Insurance, Fossil Fuels, and Climate Change, an analysis that evaluates the environmental policies of the 30 main international companies.

It can be seen that Spain’s MAPRFRE ranks seventh in underwriting and eighth in divestment, which represents progress compared to 2020 when it ranked fifteenth and fourteenth respectively. This means that, although the new commitments adopted by MAPFRE in February 2021 represent an improvement, they fall far short of best practice in the insurance industry and therefore fall short of the goals they are required to meet in the Paris Agreement targets.

Quentin Aubineau, a lawyer at IIDMA says, “MAPFRE’s ranking in the 2021 scorecard cannot hide the shortcomings of its new commitments on coal and Arctic oil and gas extraction. It is essential for MAPFRE to rely on science in order the strengthen its fossil fuel commitments and contribute to the decarbonization of the economy.”

Internationally, the report finds that while 14 insurers have oil sands exclusion policies, only France’s AXA, Italy’s Generali, and Australia’s Suncorp have made commitments on oil and gas, despite warnings from the International Energy Agency and the Intergovernmental Panel on Climate Change (IPCC) that the expansion of fossil fuels is not compatible with the Paris Agreement.

Just 10 insurers account for 70% of the oil and gas insurance market. This means that AIG, Travelers, Zurich, Allianz, Chubb, Liberty Mutual and MAPFRE could end up with more than half of the sector’s underwriting.

Insurers receive $18.5 billion annually for their oil and gas premiums. The figure, while it may seem high, is small compared to their total revenues. On the other hand, there are increasing financial incentives for them not to support this sector. French bank, Société Générale, has reported how insurers with strong carbon and ESG policies are adding billions to their value so, “Reducing exposure to oil and gas could unlock an additional green premium for the sector.”

Peter Bosshard, international coordinator of the Insure Our Futures campaign warns, “The insurance industry is abandoning climate leadership by continuing to underwrite new oil and gas projects. The scientific consensus is clear: there is no way to avoid a climate catastrophe if we expand fossil fuel production. Most insurers recognize the threat of climate change and action by just a few major players in oil and gas could have a significant impact.”

Since 2017, 35 insurers have withdrawn coal coverage, up from 23 a year ago, including more than 50% of the global reinsurance market. This progress demonstrates that action can be taken quickly and concrete results can be achieved. Coal companies now face rising premiums, reduced coverage and difficulties in finding insurance. U.S. and Bermuda insurers are the last lifeline in an increasingly uninsurable sector.

European insurers continue to lead the way out of coal. Japanese and Korean insurers are beginning to follow the European lead and have stronger policies than most U.S. insurers. It is worth nothing that the Chinese government’s decision to stop building coal-fired power plants abroad could mean the end of Chinese insurers’ support for new coal projects outside the country.

On the other hand, the global market for reinsurance treaties, which represents more than $500 billion, still a major gap in coal exclusion. While many reinsurers, such as MAPFRE, have adopted policies to exclude direct coal insurance, only Swizz RE and SCOR have announced plans to eliminate coal from their reinsurance treaty business, Munich Re and Hanover RE are considering taking similar measures. Without reinsurance contracts, many of the companies that continue to ensure coal would not have the reinsurance necessary to continue that line of business.

Leaders and laggards: How are insurers positioned?

The report ranks 30 insurers based on their underwriting commitments, fossil fuel investment, and other climate leadership. It is compiled based on a survey of 17 of these insurers and on publicly available information from insurers that did not respond. The full methodology is available here.

The full report can be downloaded here: http://insure-our-future.com/scorecard 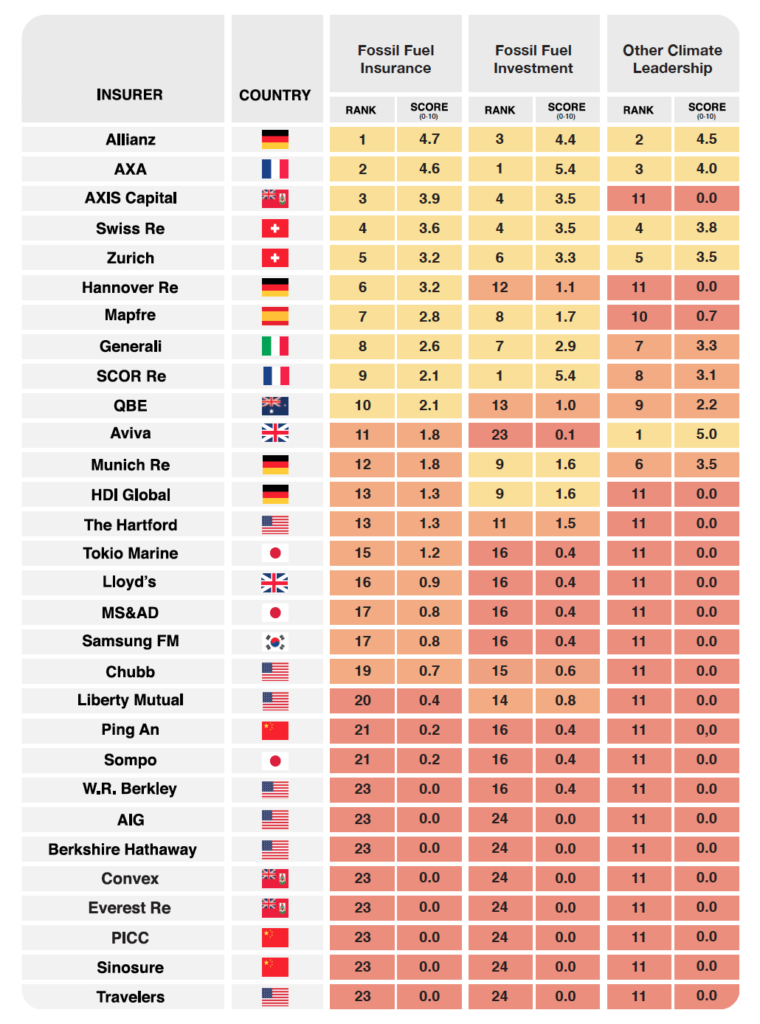